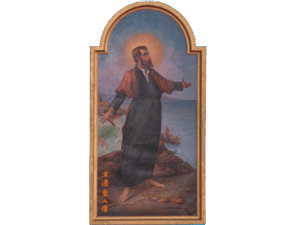 St. Francis Xavier, born in 1506, was a great missionary from a Basque noble family. He was an ambitious person who wanted to accomplish great things in the world. He was sent by his family to the University of Paris in 1525, where he became a professor and met his beloved mentor and friend, Ignatius Loyola. Through this friendship, Francis became one of the seven founding members of the Society of Jesus.

In 1537, he was ordained a priest and volunteered for a missions in India. In 1542, he arrived in the city of Goa. He spent most of his time taking care of the poor and the sick, as well as spending his nights praying. He also focused on reforming the youth to practice sincere piety. Every morning, after visiting hospitals, St. Francis would walk through the streets of Goa ringing a bell to call people to send their children and slaves to catechism class. Crowds would gather around him, drawn to his sweet words and charitable love for them. The fruits of St. Francis’ zeal for spreading the Gospel to new worlds can be seen by the millions who were drawn to baptism during the ten years he spent in India, Malaysia and Japan. In 1552, St. Francis Xavier died off the coast of China, having built the foundations, but falling short of his dream to evangelize to the new Church there.