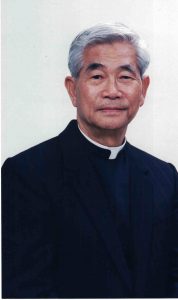 Father Aloysius Lou was born on November 14, 1933, in Hong Kong as the youngest son to parents, Francisco and Sau Wah. At the age of four, he fled with his family to Macau to escape the Japanese invasion. There, he attended the Istitudo Salesiano with his older brother Pedro, where his father worked as a secretary.

In the following years, his family faced a punishing twist of fate when his father died. Coping with distress as a young widow, his mother found work with the Precious Blood Sisters and through the missionary, she found grace in knowing God. As a devout Catholic, she instilled her spirituality in her children. Fr. Aloysius was baptized in Macau in 1944. After the war ended in 1945, he followed his family and settled in Hong Kong.

In 1949, Fr. Aloysius responded to his calling and joined the Salesian of Don Bosco. In 1953, he went on to study philosophy at the Novitiate Salesian Seminary in Naples, Italy where he stayed for several years. In 1959, he studied theology at Melchet Court, Sherfield, England, where he entered his lifelong journey into priesthood.

Fr. Aloysius was ordained in Macau on December 18, 1965. He started first as a teacher and administrator in Salesian schools and then discerned the call to serve as a diocesan priest. He came to the Archdiocese of Vancouver in 1972 and was incardinated into the Presbyterate of the Archdiocese in 1979. He is most remembered for having served for a long time with dedication and zeal at Saint Francis Xavier Parish, in Vancouver.

As a former teacher, Fr. Aloysius was dedicated to nurturing the spiritual maturity of his ministry. He founded the local Council of the ‘Knights of Columbus’ in St. Francis Xavier Parish in 2005. He was very supportive of the Knights which earned him a 4th Degrees member ranking, titled ‘Sir Knight’. He was also the founder of ‘Saint Joseph Sodality’ for family heads.

Like a good shepherd who is constantly on the lookout for green pastures, Fr. Aloysius tirelessly devoted himself to his ministry. With keen observations and confidence, he identified areas in which promotion and upgrade were apparent. Under his leadership, he led the building of a home for the elderly – Happy Manor was opened in July 1979.  In the following year, the new parish daycare center was also completed. Father was always committed to help and respond swiftly to requests. Since 1975, he took up additional ministry work in Seattle for the Catholic community there. His heart was moved with compassion when he learned that ‘they were like sheep without a shepherd’. He commuted to Seattle once monthly over a period of ten years.

In 1995, Fr. Aloysius was invited to serve at Our Lady of Good Counsel, in Pearl City, Honolulu, Hawaii. The congregation grew quickly, and in the summer of 1997, a Chinese ministry was established at Our Lady Star of the Sea Parish, where he was appointed associate pastor. After four happy years in Hawaii, father was called back by Archbishop Adam Exner to oversee the new Saint Francis Xavier School and church projects. Fr. Aloysius witnessed the inauguration of the new Saint Francis Xavier church and retired from active ministry in 2008.

Fr. Aloysius studied and spoke many languages and believed that language is the key to broadening one’s horizons. Since his retirement, father devoted his time to work with the Sisters of the Epiphany, a member of the Salesian family in Shaoguan, China, as a volunteer English teacher. Although technically retired, he continued to contribute much of his time and expertise to serve at St. Theresa Roman Catholic Church.

In his later years, another door opened at Saint Joseph’s Seminary and Church in Macau.  Invited by the bishop of Macau as a guest pastor, Fr. Aloysius immersed himself in a seminarian’s life of quietness and solitude. There, he reconnected with his distant memories of living in Macau during his childhood. In his retirement years, Fr. Aloysius maintained a part-time presence in Vancouver and led several pilgrimages to Europe, South America, and Asia.

Over his fifty years’ span as pastor, Fr. Aloysius touched the lives of many. His presence was found in every facet of our lives, through baptisms, sacraments, housewarmings, marriages, celebrations, and beside hospital beds. We have known him as a pastor, teacher, confessor, counsel, brother, and a friend. Father fell ill in the beginning of 2022 and bravely fought his illness. He passed away peacefully on May 20, 2022, in the comfort of his home. At the end of his life, Fr. Aloysius felt that he found contentment and fulfillment in his life as a priest, servant, man of prayer, preacher of the Word, mediator and man of the people. 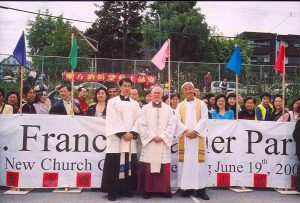 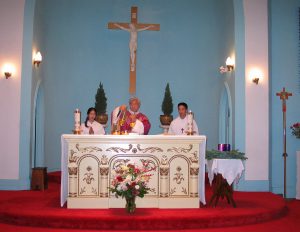 Celebrating the last Mass at the old church 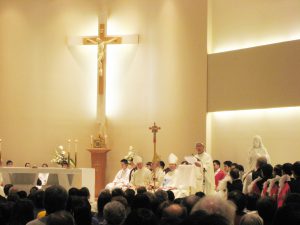 Celebrating Mass at the new church 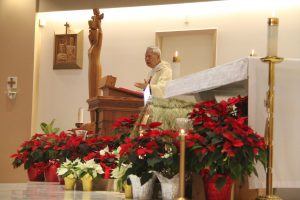 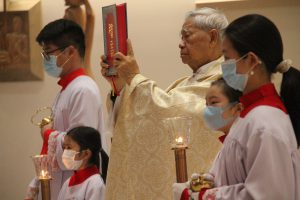 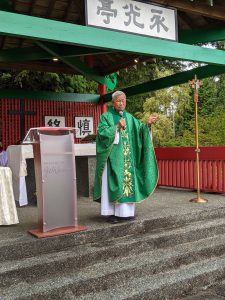 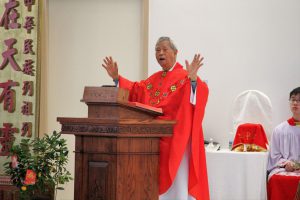 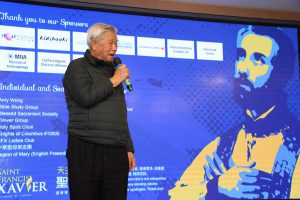 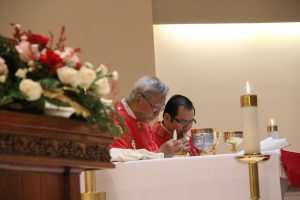 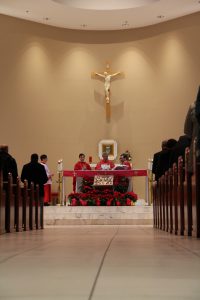 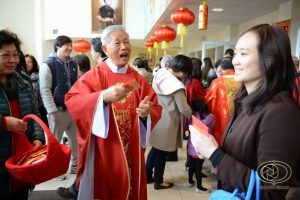